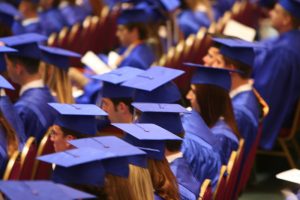 Already high, student loan debt creeps higher each year. In 2013, the average borrower who had taken out student loans graduated from college with $28,400 in debt, according to the Institute for College Access and Success. New estimates for the class of 2015 put that figure even higher, at $35,000.

Meanwhile, the average starting salary for new graduates with a bachelor’s degree is $48,127, according to the Society for Human Resources Management.

That’s a tough way to start your professional career. And if that’s what your situation looks like, it’s probably tempting to just make your minimum monthly payments and know that your debt will be gone in 10 years.

But that’s not the only way to go — and not necessarily the best way. Paying just a little more than the minimum each month can get you debt-free a whole lot sooner and save you a lot of money. To see just how big of a difference it can make, let’s crunch the numbers.

Here are the assumptions I made when analyzing the numbers for a typical graduate:

How much money could you save?

Using these numbers, I ran three different scenarios through PowerPay (a great tool if you want to check things yourself). Here’s how it played out.

If you made every single one of those monthly payments, you would be debt-free in 10 years after having paid more than $8,500 in interest.

Say you found some creative ways to save money and increased your monthly payment to $500, about 14% of take-home pay.

You would be debt-free in just under seven years and you would save yourself $2,853 in interest. All of that — just for finding an extra $137 to put toward your debt each month.

Well, if you could bump your monthly payment up to $1,000 per month, you would be debt-free in just over three years and you would save yourself $5,938 in interest.

And if you wanted to get really crazy and put 50% of your take-home pay toward your student loans ($1,750 per month), you’d be debt-free in under two years and save yourself more than $7,000 in interest!

What would you do with all that money and no debt holding you back?

There are some cases where it makes sense to pay only the minimums — especially if your student loan balance is much higher than your annual income and you could qualify for forgiveness (especially public service loan forgiveness).

This article originally appeared on NerdWallet