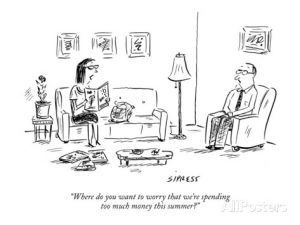 As a financial planner, my job is to help people make smart financial decisions. That means planning ahead for big purchases, making rational spend vs. save decisions, and generally being purposeful and thoughtful with your money.

It’s a noble endeavor, but the truth is that we’re all human and we all make less-than-optimal decisions from time to time. Myself included. Here are three examples where I made decisions that were frowned upon by my financial planning alter-ego.

My brother got married. It was a beautiful wedding, lots of fun with friends and family, and he and his wife had a great time. It was also a little awkward for me. As the older, single sister at the time, I honestly felt a little self-conscious.

So what did I do? I spent a LOT of money on makeup: brushes, blushes, two types of foundation, extra eye shadows. I went nuts! It was an emotional decision through and through. It was way more than I “should” have spent, and certainly more than I had planned. But I wanted to look good and the makeup helped me feel comfortable. It may not have been the most rational decision, but it was certainly a human one.

A few years ago I decided to start my business. And while I was excited about the possibilities for how it could grow, there was also a lot about it that I couldn’t really plan for. I didn’t know how long it would take to be profitable, how much of my time it would consume, or really anything else about what the experience would truly be like.

So of course I also decided to start remodeling my house at exactly the same time. Another project with a lot of moving parts, a lot of uncertainty, and a big investment of time and money. Tackling two big goals at the same time caused a lot of stress. I was worried about money, stretched for time, and initially couldn’t give either one the attention they deserved.

My financial planner alter-ego should have told me to take one thing at a time. But in this case my impatience got the best of me.

Of course, I hadn’t planned for this trip. At all. I hadn’t saved for it. I hadn’t carved the time out of my schedule. And it was only a few weeks away. This was a last-second, impulse decision to the extreme.

Now, I had an amazing time and don’t regret a single thing. But money was tighter in the months surrounding the trip and everything was just a little more stressful. In an ideal world I would have planned for this kind of trip months ahead of time. Sometimes life happens and the planning happens in hindsight.


The Moral of the Story

There’s this perception around personal finance that you’re supposed to plan for everything ahead of time and make perfectly rational decisions in every situation. And to some extent that is the goal. But it’s unreasonable to think that you’ll be able to do that 100% of the time.

We’re all human and we all do things imperfectly. When that happens, cut yourself some slack and move on to the next decision so that you are reasonably on track.